The Natural History of Madagascar

Separated from Africa mainland some 165 million years ago, Madagascar has acquired its shape and position about 130 million years. Birds appeared on earth about 70 million years ago and started populating the island. As Madagascar is surrounded by large ocean, the isolation is quite obvious and the level of endemism of its wildlife and birdlife has become very high consequently.

One of these early Malagasy fossils was called Vorona berivotrensis. This animal was supposed to have lived from 84 to 70 million years ago and although the fossil remains are fragmentary, they show a mixture of primitive and modern birds. Another of these ancient creatures from Berivotra offsets is Rahonavis ostromi. He was probably able to fly, but he would have been clumsier in the air than most modern birds.

Madagascar possessed subfossil deposits of relatively rich of recent Pleistocene and Holocene birds. The oldest subfossil bird of Madagascar is probably no more than 20000 years old and is therefore recent. More than 70 species have been identified from these subfossil remains

There are several endemic orders, families or subfamilies of birds in Madagascar. Apart from the courol (leptosomiformes), the last representative of an order that was once widespread, these groups have developed and diversified on the spot, such as mesites (mesitornithiform, a kind of forest raspberry with short legs), crab-like brachyptérolles (or terrestrial rolls, brachypteracidae) and in sparrows, philipittiidae, bernieridae (a family recently created on the basis of genetic studies and collecting birds that were once classified in several different families) and vangas (Vangidae). The vangas offer the example of an evolutionary radiation as spectacular as that of Darwin’s famous finches at Galapagos. Within the same family of birds, aspects and extremely diverse behaviours can be found. Note that these last two families, Bernieridae and Vangidae are the two richest families in species among the Madagascar passerines.

​NATURAL HISTORY OF THE FAUNA OF MADAGASCAR 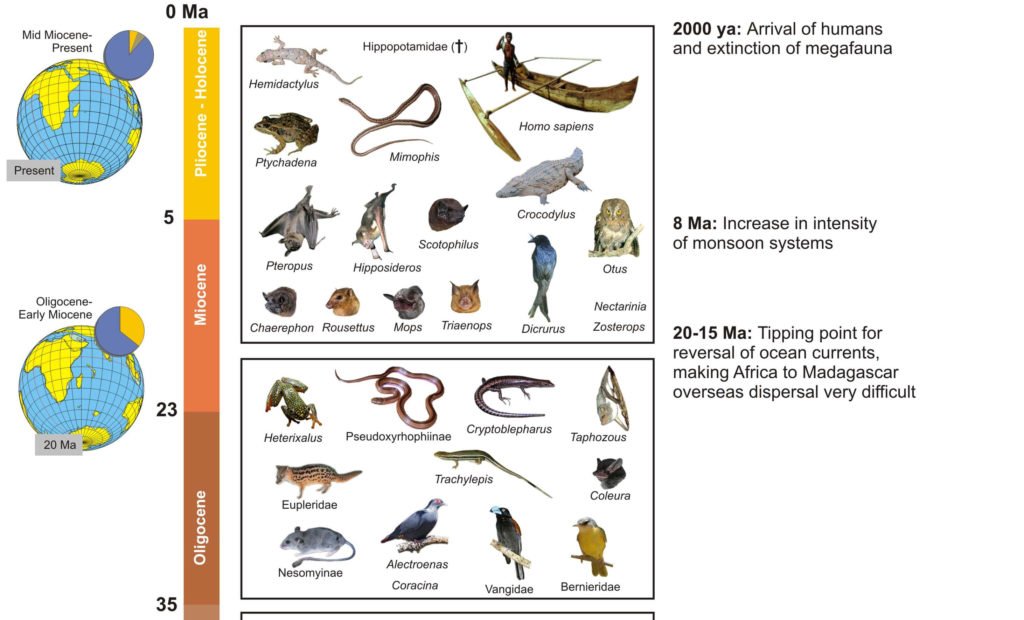